Location:The stair hall is located in the center of Casa Carlucci. The entrance to the stairs lies on the first floor past the foyer, with stairs going up to the second level. Above the stairs, the second floor is open to the roof, where a skylight causes natural light to flood the space. The second floor serves as the most important public area due to its location. There is open circulation space surrounding the stairs, allowing access to nearly every public room on this floor. Because this space is so central, it is also a focal point in Casa Carlucci.

From the foyer, the stairs lead up to the main floor. They are U-shaped with a landing in the middle and a decorative railing going up, which turns into a balustrade on the main floor. Surrounding the stairs on the second and third floors are columns with ionic capitals. This creates an interior peristyle, reminiscent of classical design. 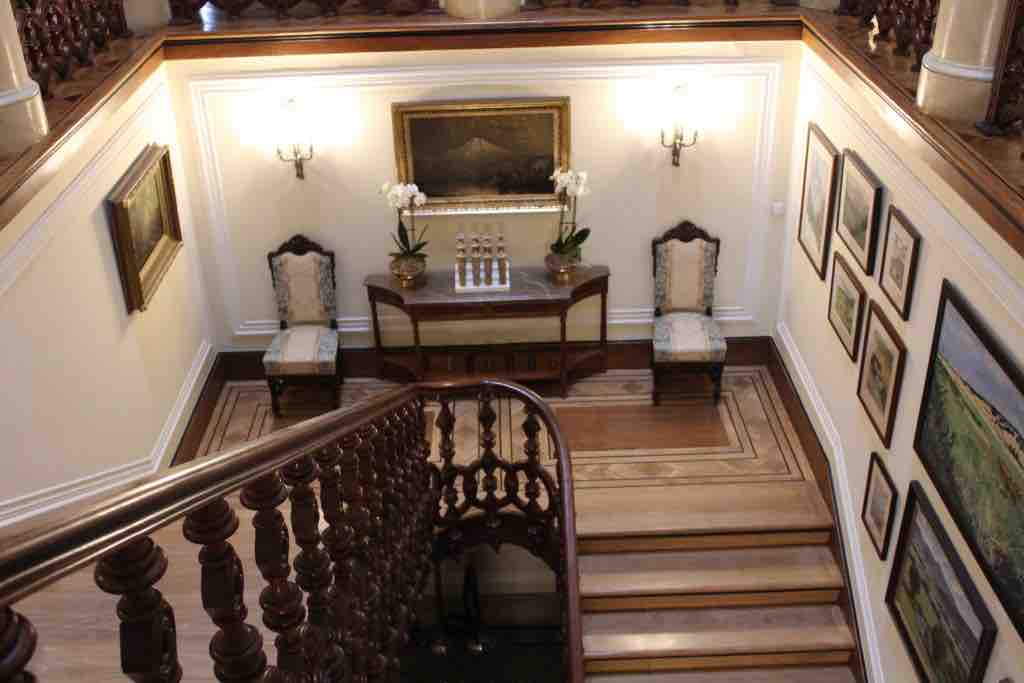 The main material in the stair hall is wood. The stairs, railing, and the floor of the second floor are made of a darker wood inlaid with geometric patterns of wood. Surrounding the staircase itself is a light, butter-yellow wall with simple white paneling. On the wall leading up the stairs, there are multiple paintings on display which feature beautiful landscapes. Against the wall on the landing there is a painting of a mountain over a console table. Flanking these central focal points are one chair on either side and a wall sconces above the chairs. 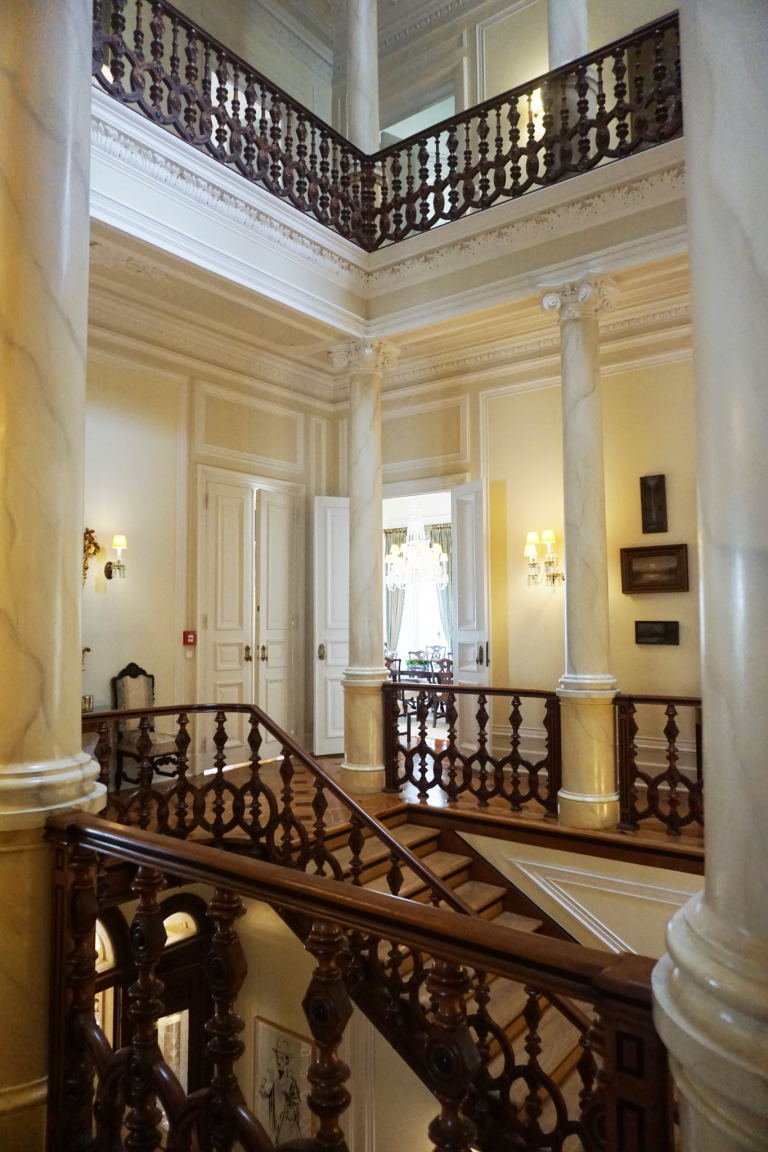 On the second floor, the flooring is wood parquet. It consists of squares of medium colored wood with a square of darker wood inlaid. The ceilings look to be about 15 feet high, and are white with simple paneling. The walls are the same light yellow coloring, detailed with similar paneling as the walls surrounding the main staircase. The columns are smooth, with ionic capitals at the top. From a distance, they appear to be made out of carrera marble. However on closer inspections, they are painted in order to give off this effect. The columns intersect the balustrade so that they are situated in between each piece of the balustrade. This contrasts with the treatment of the balustrade and columns on the third floor,
where the columns are situated behind the balustrade which is in one continuous run. In addition to the paneling on the walls, there is also an upper molding. This consists of an egg and dart pattern as well as a basic crown molding. On the wall immediately in front of the stair landing on the main floor is a console table flanked by two chairs, set up similar to the landing. However instead of a painting above the console table, there is an ornamental mirror which is flanked by two sconces. On most walls, there are french doors leading into different rooms which include the Green Room, Pink Room,Flag Room, and the Dining Room, as well as one set of doors that leads to an outdoor patio. The spaces between the doors on each wall are ornamented with art and sconces. 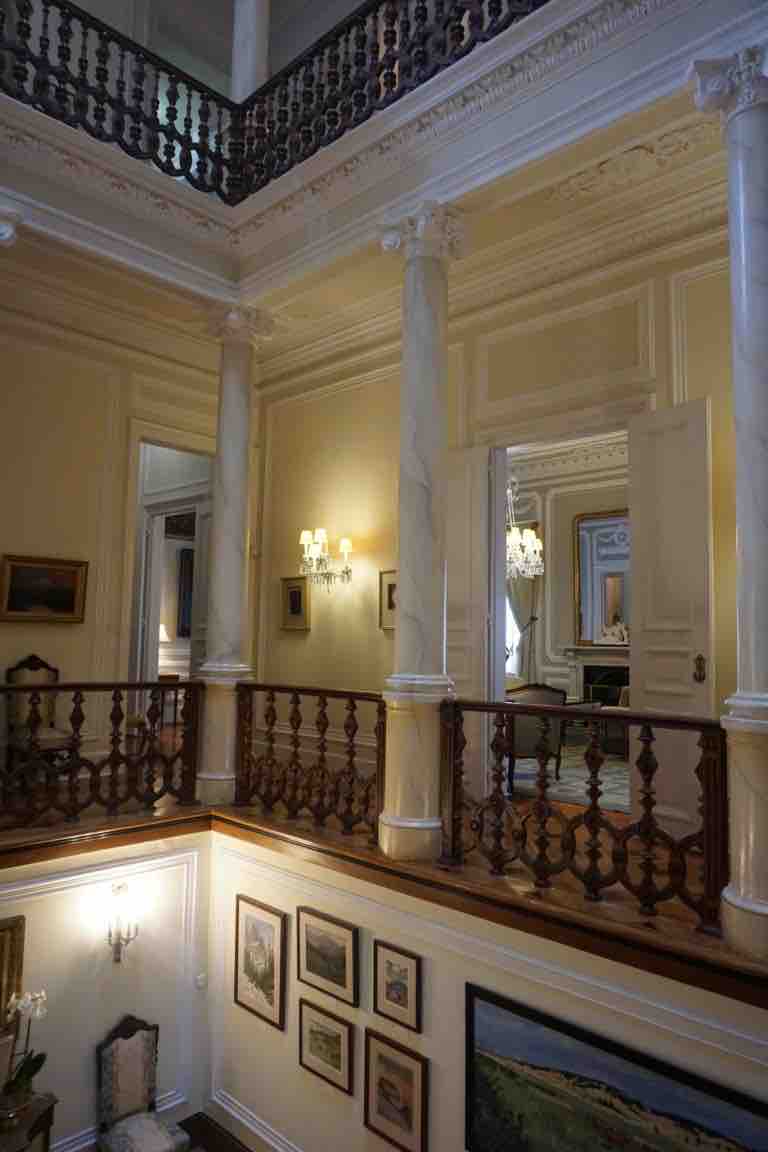 In the entrance to the stairs there is an eclectic classically ornamented console table against the east wall with a 17th century oak chair on either side with leaf/cartouche carved top rails, padded backs, stuffed seats, and a leaf/carved leg.

On the landing of the staircase there is a marble top console table with two 17th century oak chairs on either side of it with leaf/cartouche carved top rails, padded backs, stuffed seats, leaf/carved leg.

At the top of the staircase reaching the second level, the same two oak 17th century chairs sit on either side of a semicircular console table sitting below a 18th century Giltwood mirror in gilded ornamentation with rounded oblong plates and out flared border glasses.

Majority of the light fixtures throughout the space are chandelier sconces with four light sources that resemble candlesticks with lamp shades resting above. There is crystal ornamentation throughout the fixture, including a green dish sitting below each candlestick and a petal style reaching up the light. Dangling from the green crystal is roughly two inch long triangular prisms of crystal. 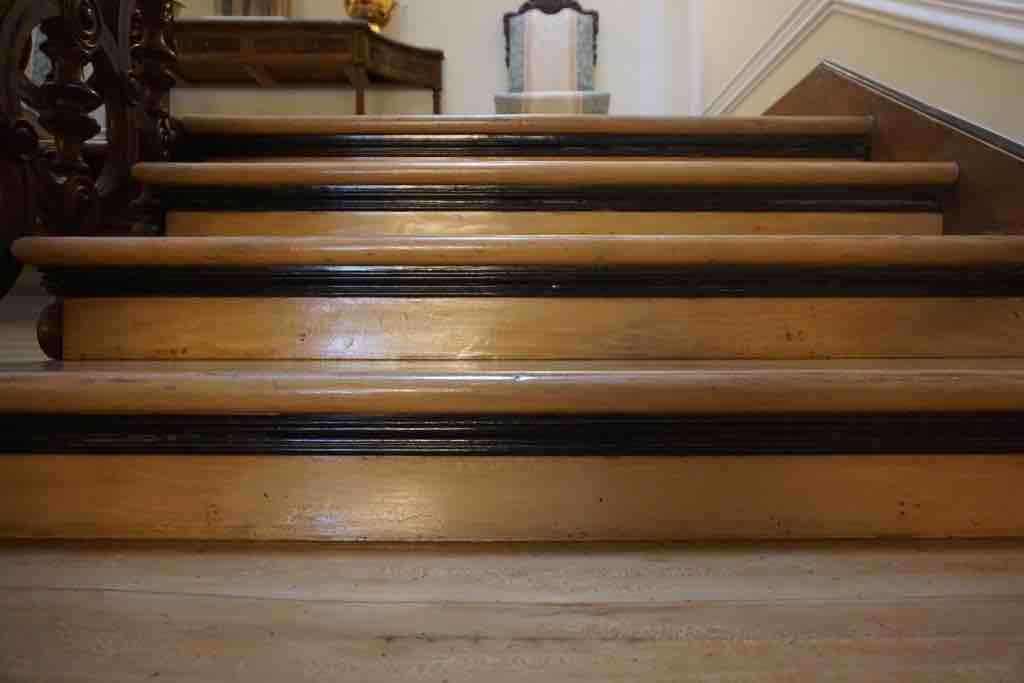 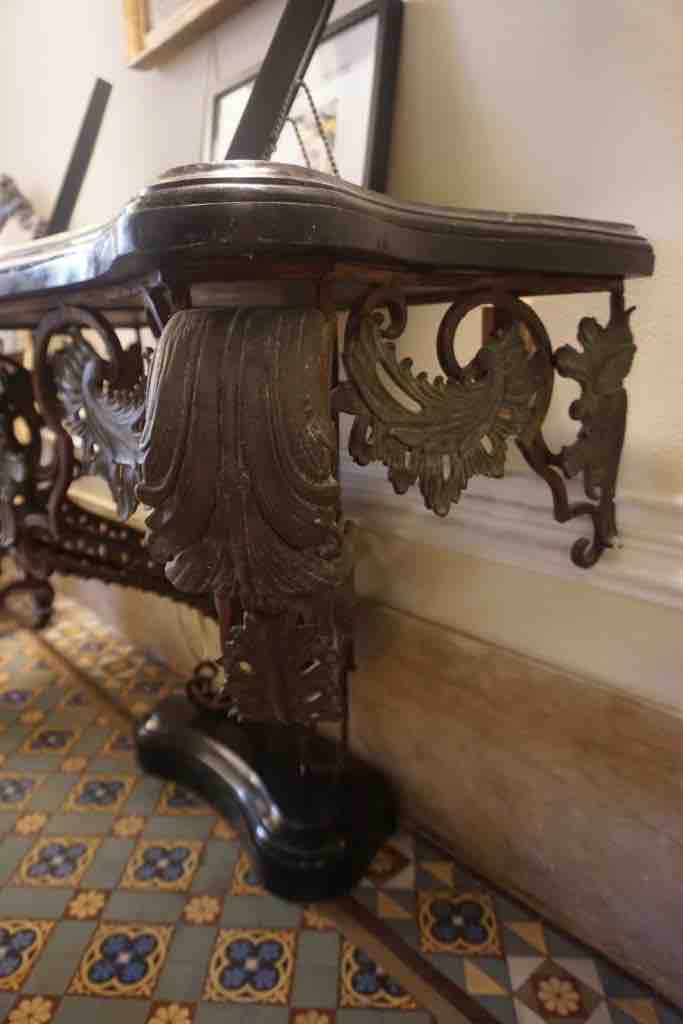 Artwork
As for artwork in the stair hall, these paintings are part of a traveling exhibition that will only be displayed temporarily. Many pieces reflect scenic landscape views. Moving up the first set of stairs there is an organized presentation of detailed prairie landscape paintings along the right hand side. Throughout the second floor surrounding the stairs, these paintings are larger and reflect mountainous landscapes with less detail.